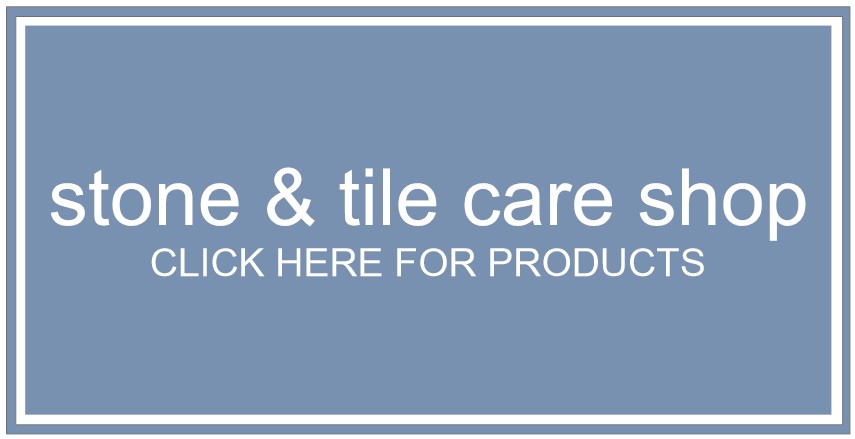 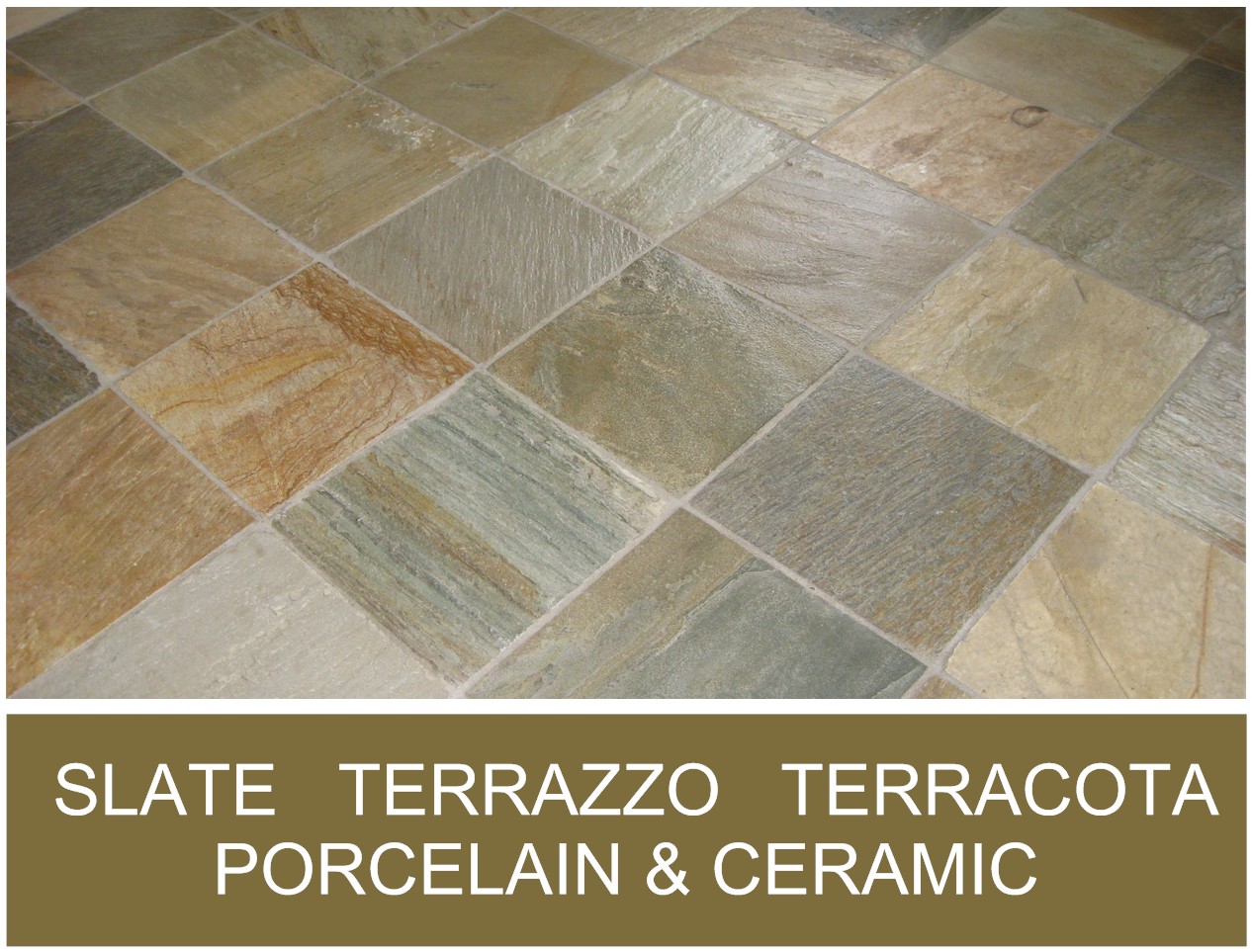 Slate - is a fine-grained, foliated, homogeneous metamorphic rock derived from an original shale-type sedimentary rock composed of clay or volcanic ash through low grade regional metamorphism. It comes in a honed, flamed textured or riven finish, even though it scratches easily, it is beautiful to polish, hone and seal. often acrylic sealers are the best to use on flamed textured and riven slate as it gives it a wet look.

Terrazzo - is a composite material, poured in place or precast. It is made up of marble, quartz, granite, glass, or other suitable chip, and is poured with a binder that cohere's the particles of stone together such as cementitious or polymeric, or a combination of both. Terrazzo is cured and then grounded down, honed and polished to a smooth finsh or finished to produce a uniformly textured finish. In order to get the best out of Terrazzo most have it polished so the marble, quartz, granite and glass shine.

Terracotta - means baked earth, from the Latin terra cotta, a type of earthenware, is a clay-based unglazed or glazed ceramic, where the fired body is porous. The term is also used to refer to items made out of this material and to its natural, brownish orange color, which varies considerably. Terracotta can be chemically cleaned and finish with various seals, oils and waxes.

Sandstone - is a clastic sedimentary rock composed mainly of sand-sized minerals or rock grains. Sandstone is mostly composed of quartz and feldspar, because these are the most common minerals in the Earth's crust. Sandstone may be any colour, like sand, the most common colours are tan, brown, yellow, red, grey, pink, white and black. It is commaonly used for building materials, tiles, slabs, external and internal flooring.

Quartz - is the second most abundant mineral in the Earth's continental crust, after feldspar. It is made up of a continuous framework of silicon–oxygen tetrahedra, with each oxygen being shared between two tetrahedra, giving an overall formula SiO2. There are many different varieties of quartz, several of which are semi-precious gemstones.

Also known as Engineered stone it is a composite material made of crushed stone bound together by an adhesive. The two common stones used in producing these products are marbles and quartz, the application of this product depends on the original stone used, for engineered marbles the most common application is indoor floor tiles, while the quartz based product is used primarily for kitchen worktops and also fllor tiles. Unlike terrazzo, the material is factory made in either blocks or slabs and tiles.

Engineered stone is also commonly referred to as, an older name agglomerate or agglomerated stone. Although both the marble and quartz based engineered stones are created through a similar process, there are distinct differences in their properties and applications.

Marble is a relatively soft material which is prone to scratching, but also makes maintaining them much less difficult. Typically they can be re-polished. Marble is also much more common and accessible around the world and comes in a wider variety, which gives their engineered counterpart a significant edge in pricing and the variety in its pattern and colors. Engineered marbles are typically most popular as flooring materials for large commercial projects such as hotels, shopping centres, business lobbies.

Quartz meanwhile is a much harder material. The Mohs scale of marble is roughly 3, where as quartz are usually at 7. This makes them much more resistant to scratching, however when it does scratch it also makes re-polishing much more difficult, which is why they are most commonly used for kitchen worktops.

Stone aggregates is the major filler, although other material like coloured glass, shells, metals, or mirrors might be added. A typical resin based material will consist of 93% stone aggregates by weight and 7% resin . Different types of resins are used by different manufacturers. Epoxy and polyester resin are the most common types.

Porcelain - tiles are made from clay but tends to be made using denser types of clay than ceramic. Porcelain tiles are baked at very high temperatures for long periods of time so that almost all the water is removed, this longer drying time makes porcelain tile much harder and denser than ceramic.

Ceramic - tiles are made from natural clay, sand and water. These materials are molded to form square or rectangular tiles and then baked in a kiln to remove most of the moisture. Both porcelain and ceramic still get dirty with grout lines becoming especially dirt, which require a special chemical machine clean abd grout clean.

Request A Call Back